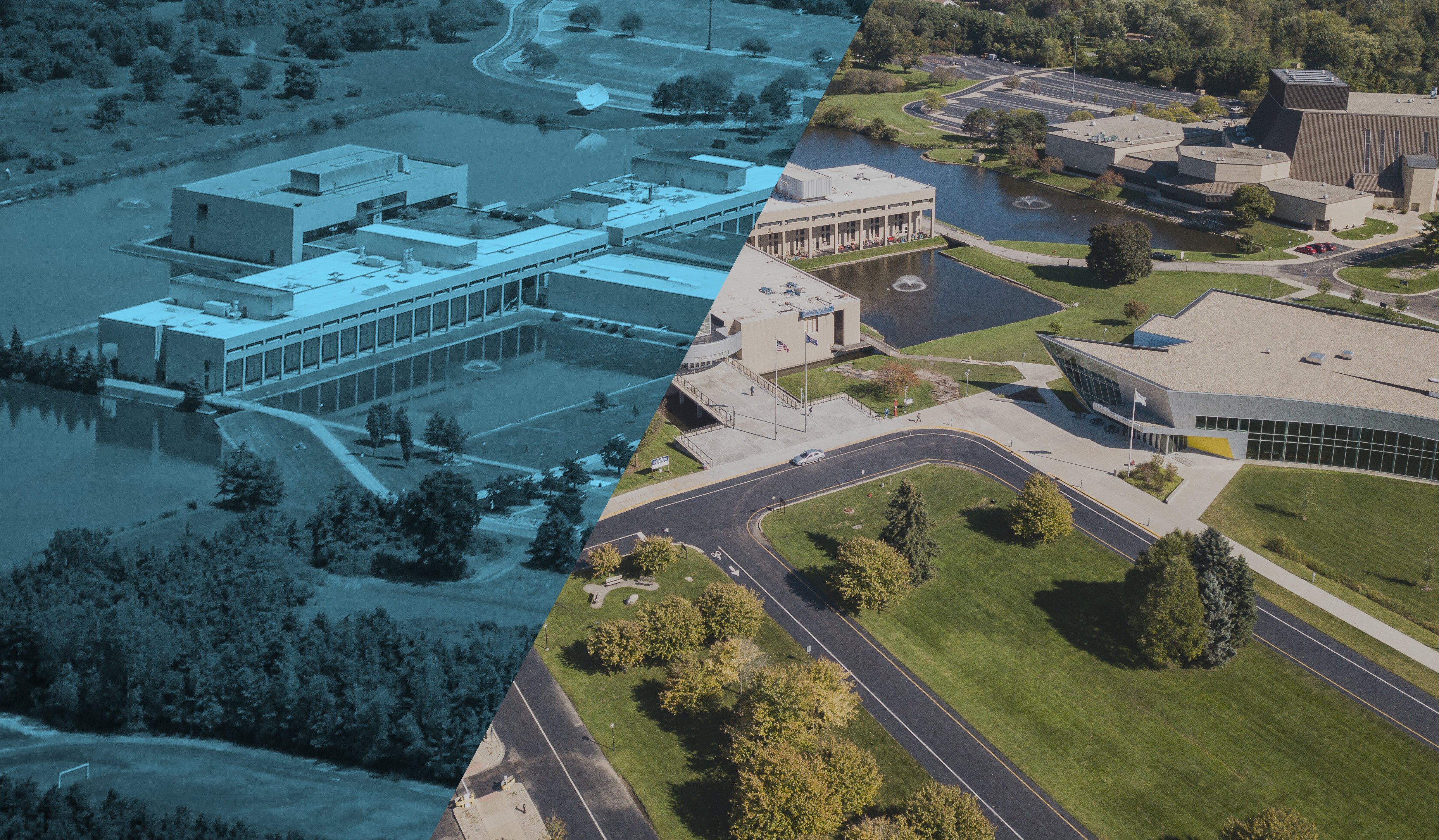 In 2009, Lake Michigan College’s (LMC) Benton Harbor Campus consisted of just three buildings – the Main Academic Building, the Mendel Center and what was then known as Western Michigan University's Southwest campus building. Now, thanks to a capital millage and the generosity of hundreds of area donors, LMC is undergoing an entire campus transformation. In 2019, the campus has doubled in size!

By spring of 2020, construction on the main campus will be complete. Classrooms, student spaces and offices in the Main Academic Buiding will be modernized and energy-efficient. The next phase will include improvements to the South Haven Campus and Niles Campus at Bertrand Crossing.

LMC’s campus life looks very different now than it did at the beginning of the decade. Since the introduction of student housing, the café and the new student center, LMC students have brought new life to the Benton Harbor Campus. In 2019, lounges at the South Haven and Niles campuses have become new and improved Hawk's Nests. The number of clubs on campus has grown to include new clubs such as Women in Business, Study Abroad, Cosplay and more. Students have demonstrated that they want to give back to the community. The student life office has increased the number of volunteer opportunities from three annual events to monthly events, attracting hundreds of student participants.

Over the course of the last decade, LMC has increased its number of associate degree programs from 27 to 49. This does not include the many certificates and community education courses offered at LMC. While continuing to provide degrees in accounting, nursing, hospitality, law enforcement, machine tool technology and more; LMC has added programs in culinary, theatre, music, welding, energy, wine and viticulture just to name a few.

LMC has a history even before this last decade of offering early college programs for students. The early/middle college partnership with Allegan county in 2015, and then with Berrien Resa in 2016, has made a big difference helping students save thousands by attending a fifth year of high school to complete college credit. Participating in this rigorous program can cut costs in half for students that are college bound, at no charge to the students.

5. First Teaching Winery In The Midwest

When LMC launched the midwest's first commercial teaching winery in 2015, it was housed in a repurposed storage area in the Mendel Center. Now, students and visitors enjoy learning, winemaking and wine tasting in one of the most impressive facilities in the country. LMC opened the new Welch teaching winery facility in 2019. Not only do students get to learn all aspects of making wine, they also learn the business side and run a wine tasting room.

LMC is proud to say it has 100+ scholarships available to students. Many of those scholarships are made possible by donors that give to LMC’s foundation. Foundation money that supported students in the last decade came to $2,755,552. This funding, on top of any federal funding a student may receive makes a difference considering how affordable LMC’s tuition ($4,708 annual out-of-district rate) already is.

The Economic Club of Southwest Michigan has brought world leaders and politicians to the region to give engaging talks for 75 years. And in 2017, the Economic Club decided to turn over its speaker series to the Lake Michigan College Mendel Center to be made part of the annual performance lineup. Since then, the Mendel Center has hosted speakers including Steve Martin, Dave Ramsey, Ann Curry and more!

With LMC students backing the decision, the college adopted Rock the Red Hawk in 2012 as its mascot. And the LMC community has embraced the red hawk life since. In 2013, LMC added women’s and men’s soccer to their lineup of athletic teams. In the last decade baseball, softball, and women’s soccer have made it to regionals, and softball made it to state. In LMC’s 2018-19 season, women’s basketball won its first outright conference title since the 1996-97 season; the MCCAA State Championship – their first since the 2000-01 season – and the National Junior College Athletic Association Region XII District G Championship. It’s the first time in program history that the Red Hawks have won all three championships in a single season.